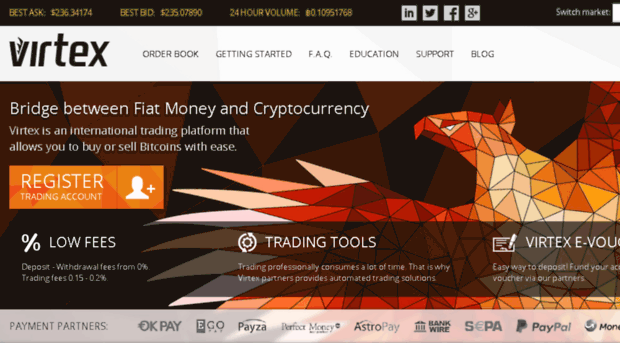 The Virtex bitcoin exchange has recently put its trading API offline without warning, and has left many customers without access to the funds they had in their trading accounts. One customer contacted Bitconist.net saying that he had $10,000 USD in a Virtex trading account that he could not withdraw when the exchange unexpectedly shut down.

In addition to the offline API, the Virtex website is no longer available. When trying to visit the website, we were greeted with a “connection failed” message. According the customer, “ It is like [Virtex] disappeared and [the exchange] never had such a website.”

Apparently, Virtex customers have been experiencing problems on the exchange since the beginning of 2015. In a Bitcoin Talk thread, customers complained about not being able to withdraw their funds from the exchange, accusing Virtex of being a scam and warning people not to do business with the company. Later comments — appearing on February 27, around the same time the customer contacted us — note that the website and API went down and that they had lost all access to their funds.

The customer stated that he sent messages to all the exchange related contacts that he could find and received no reply. We sent a message to Virtex’s support email, which the customer provided to us, and have not gotten a reply either. Additionally, we tried to contact Virtex on Twitter, also failing to get a reply. Neither the exchange’s official Twitter account nor its Facebook account have been updated since December of 2014.

After failing to get in touch with Virtex, we tried to contact EgoPay, the exchange’s payment processor, to see if it had any information regarding its client’s disappearance. The only contact information we found for EgoPay were generic inquiry email addresses on its website; we could not find information for any representatives or managers of the company. We did message EgoPay’s Twitter account, but received no reply.

Therefore, at this point in time, we do not know what has happened to Virtex. All we know is that customers have been experiencing difficulties getting money out of the exchange since January, and it disappeared altogether on February 27.

Currently, the following statements are purely speculative. Since we have failed to get in contact with Virtex and EgoPay thus far, we have no way of knowing whether the following information presents legitimate connections between EgoPay and recent exchange hacks, or if these connections are merely coincidental.

According to EgoPay’s blog, the payment processor was hacked on December 28, 2014:

“On December 28th  during the holiday period, Egopay suffered a hack that greatly impacted key merchants and partners.  False values were made available in the merchants platform, when no actual value was transmitted in Egopay.  This hacker then proceeded to convert this fake value into irreversible currencies all within a one hour window.   These merchants believed that this value was in their Egopay account, but unfortunately it was not.”

“The hack also exposed a gap in the cash reserves of Egopay.  On January 5th, 2015 it was uncovered that the owner of Egopay (Amir Aziz) who operated behind the scenes was embezzling money from the company for a period of time.  We took immediate action to restrict all his accesses as well.”

Thus, not only was EgoPay the victim of a hack that affected its merchants, but its owner had been stealing money from the company for an unknown amount of time.

What is interesting is the fact that, just a few days after EgoPay was hacked, people began experiencing problems getting money out of Virtex, which is a client of EgoPay. Additionally, a little over a month after EgoPay was hacked, BTER, a Bitcoin exchange, experienced a cold wallet hack and lost $1.75 million USD in bitcoin. On January 27, 2015, LocalBitcoins, yet another client of EgoPay, had its chat client hacked. This attack resulted in a loss of 17 bitcoins.

Therefore, in the two months after the EgoPay hack, three of its clients were the victims of attacks that resulted in losses of customer funds. The discovery that the company’s owner had been embezzling money also occurred during this same time period.

It does not appear as if the EgoPay owner’s actions had anything to do the attacks on EgoPay’s clients. However, it may be the case that the three exchanges were hacked by the same person or group or a related party. That, of course, cannot be known for sure without solid evidence.

Again, we have no proof that any of these hacks are related, but it does seem worth noting that they occurred within two months of each other, after their payment processor was hacked. We also do not have concrete evidence that the Virtex shut down is the exit phase of a scam, or if the exchange went offline for legitimate reasons. However, given that Virtex went offline without warning, after a month of failing to release customer funds, it does not seem likely that Virtex will come back with its customers’ money or an explanation for why it went offline.

If we receive any additional information from Virtex, EgoPay, or anyone who might know something about Virtex’s disappearance, we will update this article.

Do you know anything about Virtex shutting down? Please let us know in the comments below, or by contacting us through our email or social media.