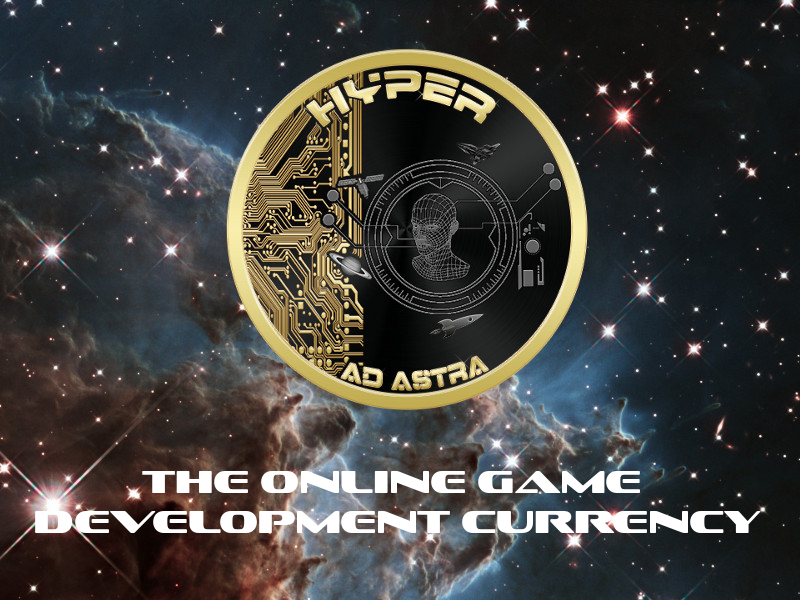 Like most coins, HYPER is a scrypt coin. Unlike many coins, they have a SPACE MMO in the works, similar to Voidspace. Today I’m here with the developer of HYPER discussing the views and direction that HYPER is headed, with potential followup articles in the future.

Essentially, HYPER is a low energy cryptocurrency designed for use in online games, MMOs, virtual worlds and more. The currency is currently used in Counter-Strike, Minecraft, and Zandagort – a space-based strategy MMO game server we are running where an in-game free market trading platform for HYPER is being currently developed.

The HYPER team is also developing an original space-based strategy MMO game that will utilize HYPER as the in-game currency. HYPER is also low energy as it is now a 100% proof of stake coin. People who hold HYPER in their wallet support the network by keeping their wallet open – anyone with HYPER in their wallet will start minting new coins with their laptop as a reward for supporting the network. It is accessible, low energy,  and there will be no unsustainable ASIC mining races as we are seeing now across the board with many other cryptocurrencies.

2. Why did you choose the name of HYPER?

I wanted a name that conveyed a sense of high value, evoked thoughts of online gaming, and that also sounded suitably futuristic. Originally I was actually going to call HYPER Hypergold, but when I googled it someone had a trademark on this in the US, and I didn’t want to go down that road (just think of Coinye and what happened to the Dev team there with the Kanye West lawsuits).

So I settled for HYPER, which has turned out well as HYPER really does sound like a fuel for faster than light spaceships (which is what HYPER really is), and I also think HYPER is the first crypto to have the ticker and the name of the currency as the same word.

I’ve always loved 4X space strategy games like Masters of Orion II, Galactic Civilizations, Alpha Centauri, and Endless Space. So I was intrigued and inspired when about a year ago I discovered an Open Transactions project Galactic Milieu that has been developed as a side project by MarkM from bitcointalk. The idea with Galactic Milieu is that people can make contracts with each other in Bitcoin and Devcoin, in a galactic context and between different galactic civilisations. The only problem with Galactic Milieu is that it is not very accessible.

For the past year the idea stuck with me, and I really wanted to develop a more accessible space-based strategy MMO where players could trade cryptocurrencies with each other for other in-game assets and resources the players have earned from their ever growing galactic empires. Creating a new cryptocurrency that could also sponsor the development of the MMO, as well as being the primary in-game currency, made sense to me. To create new and emergent trading opportunities, I also decided an in-game securities platform would be a profitable, fun and interesting idea. So it was in that moment of inspiration and connecting disparate ideas that HYPER was born, and it was in May this year I decided to take action and launch HYPER.

It just seemed natural to me to also go one step further and embed HYPER in a diverse ecosystem of as many different online games, services and MMOs as possible, which is starting to take shape now.

Although I have been mulling over the details of HYPER and the cryptocurrency space MMO for over a year, HYPER was launched with very little fanfare on May 25th 2014, on the bitcointalk forums. Looking back a pre ANN would have been much better for the coin, but this is my first coin and hindsight always makes things easier.

Since being launched 6 weeks ago the progress HYPER has made in terms of its projects and ecosystem is quite astounding. There are 4 online game servers that use HYPER as a currency, and the core HYPER MMO development team now has about 10 team members including authors, artists, coders, gamers, a project manager, sound designers and more.

Overall the community support and the number of people who have volunteered their time to help move the project forward has been phenomenal. Key contributors are also paid in HYPER for their work, and anyone is welcome to come and get involved.

We even have a Hungarian developer who is working on adding HYPER to the in-game free market trading platform in the space-based strategy MMO Zandagort we are running.

The vast majority of cryptocurrencies have very limited ecosystems and are for speculation only. HYPER is unique in that the coin is embedded in a complex and growing ecosystem of gamers, traders and stakers.

The biggest reason HYPER is different is that the currency is sponsoring the development of a space strategy MMO game that will utilize HYPER as the main in-game currency. Players will be able to trade HYPER for other in-game resources and currencies on an in-built free market exchange platform. Our Zandagort server will actually have this feature within a month or so, which will actually be a first for any cryptocurrency and any space-based MMO game.

We also have 4 game servers that currently use HYPER, with plans for many more games in the works and on the way.

So we are still deciding if we should go ahead with the Market Stabilization Fund due to criticisms such as these. When appropriate I always try and take on board feedback from those who are deeply invested and involved in HYPER. We are also in the process of having the HYPER website redesigned and we will most likely remove the section on the Market Stabilization Fund while the community comes to a decision.

HYPER is a 100% proof of stake coin, which means that the network does not use huge amounts of energy mining as with proof of work cryptocurrencies such as Bitcoin. Anyone can keep their HYPER in their wallet on a desktop computer and be rewarded HYPER for helping to support the network. The current interest rate is 5% monthly paid daily to stakers.

This will last for 5 years before HYPER shifts to 10% annual interest paid daily. Counter-intuitively, many people hold on to their staking coins so that they can stake even more, so proof of stake coins like HYPER tend to have relatively stable and growing exchange rates compared to other cryptocurrencies (especially compared to pure PoW cryptocurrencies).

100% Proof of Stake (PoS)
5% per month, compounding and added daily

PoW/PoS – FINISHED
This phase was for PoW and will also include 5% monthly interest for
holders compounding daily (will last approximately 2 weeks).

PoS Stage 3
2% annual interest, applied and compounding daily (this is yet to be
added to the HYPER source code and this stage will last forever).

HYPER multipool: https://chunkypools.com/hyper/ Mine HYPER with X11,
Scrypt and SHA 256 (put those old Bitcoin miners to good use)

Over 500 000 HYPER has already been given out on the following projects:

These bounty funds will be spent on giveaways and critical HYPER bounties to help raise awareness of HYPER, launch awesome and time intensive HYPER game projects like the Minecraft, Zandagort and Counter Strike servers, and distribute HYPER to as many people as possible. The funds will be used for further HYPER development so HYPER can continue to grow an unprecedented ecosystem of HYPER games and HYPER game servers. Bringing value to everyone involved in HYPER.

There are so many future plans for HYPER development it’s hard to know what to mention first. A key priority is the launch of the alpha of the core HYPER MMO, which is tentatively scheduled for June 2015.

Ultimately, if HYPER reaches a high enough market cap, a company will be founded as a legal structure for the management of the HYPER MMO. There is no ETA on this possibility, and it will be announced publicly if we move forward with founding a HYPER company.

Beyond the MMO, we have plans for HYPER to be added to many more online games and servers; there is enough HYPER to continue paying substantial bounties to developers who add HYPER into their online game worlds and servers. Increasing the HYPER functionality on existing HYPER game servers will also be a priority, such as the HYPER free market trading platform we are currently adding to the space strategy MMO game Zandagort we are running.

The HYPER website is currently being redesigned and we have plans to start regular HYPER Counter Strike tournaments, where big HYPER prizes will be offered, and entrance fees will be paid in HYPER. We are also in touch with a number of game developers and server admins who will be launching more game servers that integrate HYPER in the near future.

Future plans for the HYPER cryptocurrency wallet itself include built in irc chat, market data, decentralized HYPER exchange, and the main HYPER MMO itself being integrated into the HYPER wallet when it is launched.

Through giving HYPER bounties to server admins and online game developers, we aim to eventually have hundreds of online games and servers that utilize HYPER as the in-game currency. The key focus of all our future development plans is to ensure HYPER has a diverse and unprecedented ecosystem that provides many unique opportunities for gaming, trading and profit.

HYPER multipool to mine HYPER with SHA256, X11 and more:
https://chunkypools.com/hyper/

To get involved in the HYPER MMO project:
http://hypercrypto.com/forum/index.php?board=1.0

HYPER giveaways on the forum:
http://hypercrypto.com/forum/index.php?board=10.0

Is Silvergate In Trouble? Why Didn’t KYC And AML Prevent The FTX Fiasco?