Factoids: The Tokens that Drive the Factom Protocol

Factom is a data layer for the blockchain that allows users to permanently secure documents and even whole business processes. The Factom technology is especially compelling for those who want to build trust with users by providing complete transparency and real-time auditing of their systems, while at the same time maintaining user privacy. 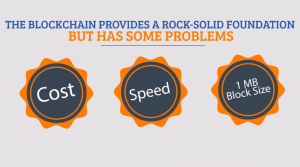 The blockchain technology is a viable solution for record keeping. It represents a permanent and secure database for recording keeping secured by thousands and thousands of computers distributed around the world. This technology enables us to record the entire world’s data securely. The blockchain can also be used to secure communications between bank branches and other divisions, and bank institutions have already proven to be extremely interested in this new technology. Despite the potential of the blockchain technology, there are a few limitations, and it can’t handle all the data we need to store on top of it. Factom has developed a way of resolving this problem. It lets you store millions of data on the blockchain with a single hash every ten minutes, enhancing this way the total storage capacity of the blockchain.

Factom has introduced a new system that allows for a database to be built on top of the blockchain, overlapping this way all the technology constrains. Factom’s Lead Developer and Founder, Paul Snow, has been working on this with their development team in Austin. The big innovation in Factom is that it ensures that anyone who wants to use the protocol will never have to deal with digital currency. As we know, Banks are quite unfriendly to bitcoin; much in part because of the regulatory pressure, but Factom has managed to outstrip this issue.

Factom organizes all the documents into a chain of entries. These entries are organized into directory blocks which allow users to pull only the data that relevant to them. Directory blocks are secured into the blockchain every 10 minutes allowing the storage millions of data in a single hash. Factom can be used to develop applications for asset trading and management, security applications, coordinating systems of record, simple proof of publishing, real-time auditing and much more.

Factom uses a Token called Factoid that drives the system. Factoids are a fundamental piece of the network architecture. Factoids are responsible for the communication within the network of servers while serving as a reward for nodes in the network. They are used to pay for other incentives as well such as those recently proposed with Factom’s partnerships with Tether, Coinapult, Tradle, and Serica.

So, What are Factoids For? 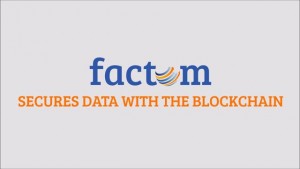 Factoids essentially represent the right to use the protocol to record data. Factoids are freely traded as well; if someone wanted to create a store that would sell Factoids, it would need to buy them from the market. Factom servers will be paid in factoids to run services for the network, and businesses will need to connect to servers who will sell them “Entry Credits.” Factoids will be running through the backbone of the network making sure that records are secured and properly stored while, on the businesses side, it will only possible to see the assigned Entry Credits.

Factoids can be used to purchase Entry Credits. As the price of factoids will vary, once Entry Credits are bought, the protocol will execute the conversion accordingly and the servers are rewarded with factoids. In a first phase factoids will be created as a part of the crowd sale. Secondly, Factoids will be created at a fixed rate and paid to the Factom Servers and Audit Servers for their work running the system, and to pay other incentives. Additionally, being the cryptocurrency that drives the network, Factoids will only be used by those running the network or traders looking to invest. 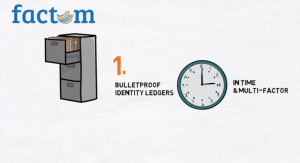 Factoids will be used to run the network and will represent the internal communication layer of the network while entry credits will only be assigned to the public. Factom chain and the Entry chain are managed and validated in real time by the Factom Servers. The Factoid paid out to servers is calculated by dividing the total number of Factoids on the protocol by the number of outstanding Entry Credits.

Essentially, Entry credits will be some kind of Factoid extension to the real world of business since it separates digital currency from a process where credits are used to ensure a service.

Factom is a distributed, autonomous layer built on top of the Bitcoin blockchain offering the possibility for Institutions that are naturally unfriendly to digital currency to start using it without even having to deal with cryptocurrency. Entry Credits and Factoids are the foundation of this secure two-layered system as they represent two parts of the same piece but with different purposes. While Factoids represent the internal scarcity token used to moderate, decentralize and reward the system actors, Entry Credits are used, in correlation with factoids, but represent the right to introduce Entries into the Factom network.

Factoids will be available for purchase starting March 31st via token sale, for more information you can visit Factom.org

We would like to hear your considerations about technology. Let us know your opinion on the comments below!