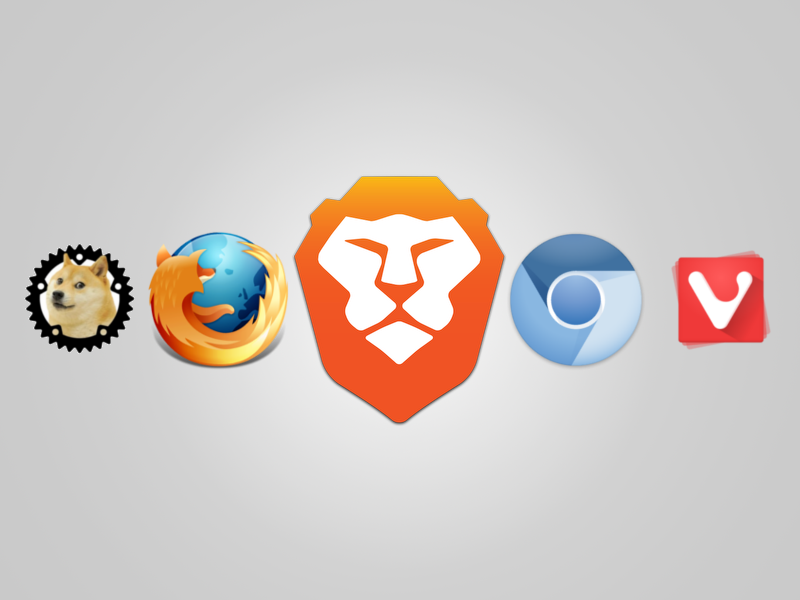 A ‘Brave’ New Benchmark: Putting the Browser’s Hype to the Test

by Tyson O'Ham
in Bitcoin, Start-Ups
0

We previously tested a very early build of Brave to see what kind of performance the new browser was packing. The thing is, that build wasn’t feature-complete or optimized for release. Now that it’s out in the wild (users are still waiting on the promised Bitcoin-centric features mind you) with all of its bells and whistles we thought we’d revisit our initial tests, and cast a wider net to give you a good metric for Brave’s real-world performance as it stands.

Is it as fast as it was before release? Is the responsiveness a nice bonus to their browsing experience, or is it just placebo compounded by novelty? We’ve rounded up six modern browsers, including a peek at the still-in-infancy Mozilla Servo, and tested them rigorously in an attempt to answer these questions.

Each Browser is the latest version available, stock standard with no customization whatsoever, with the exception of Firefox, which is heavily extended and in use as my daily driver. I included it in testing to give a baseline for performance after long-term use and customization.

These are the normalized scores for each benchmark we ran. It’s hard to see a clear performance champ, but Brave initially looks healthy. Note that Vivaldi, Chromium and Brave are all based on Chrome, so we can reasonably expect them to perform similarly, though Brave is anecdotally supposed to be more performant. Speedometer seems heavily skewed towards Chrome optimization as well: 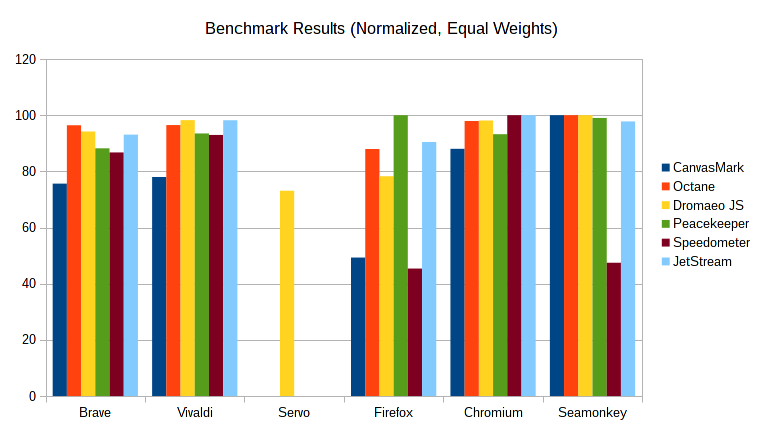 Here we see memory consumption with a large amount of tabs open. Brave consumes the second highest amount of memory out of all the browsers tested. Something to consider, as it may not run as well on systems with less than 8GB of RAM: 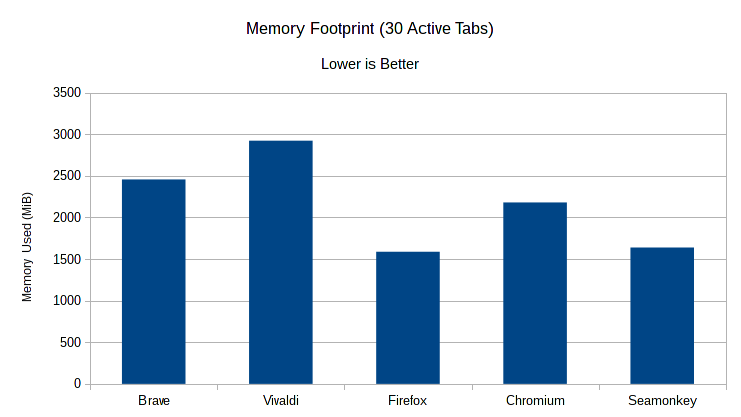 Interesting side note: I attempted to benchmark a release optimized build of Servo to see how far the project had progressed, and I very quickly got my answer — not very. The only thing I could get to run was Mozilla’s Dromaeo JS suite, which puts Servo’s performance at a little below a customized Firefox: 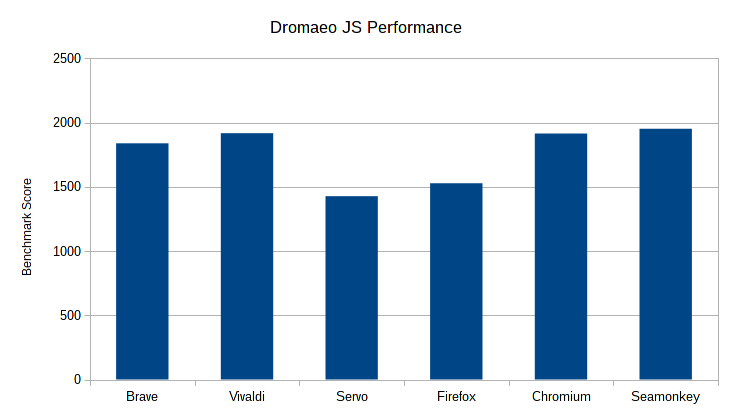 Here are the Peacekeeper Platform-Neutral Benchmark scores, relative to Brave’s performance. The picture starts to get a little clearer here: 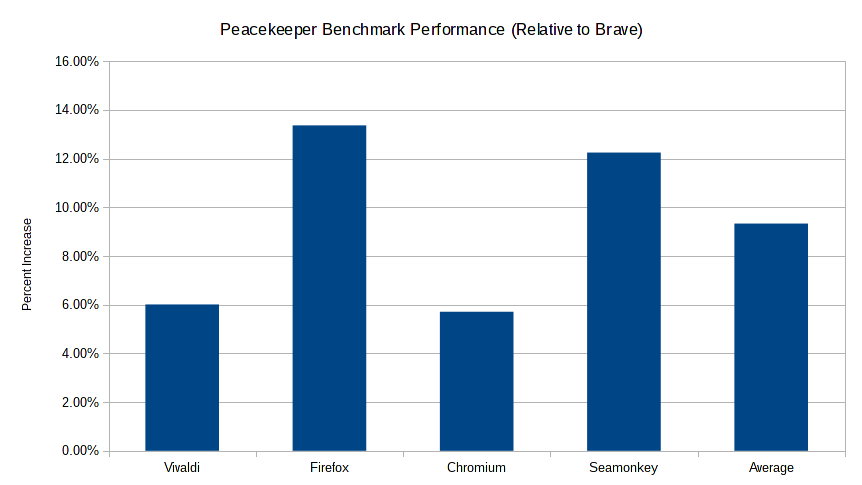 And the aggregate normalized scores from every benchmark used in our tests: 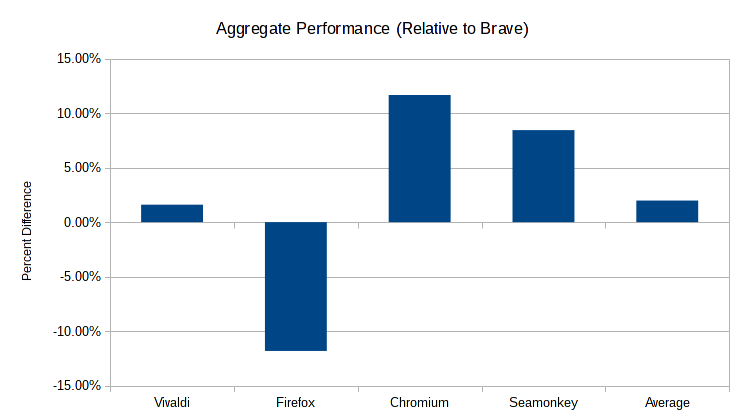 Brave is disappointingly slow, performing the worst out of the box, and only beating my extended and abused installation of Firefox. It even underperforms the aggregate average that includes Firefox as a negative outlier.

It also comes in second to last on system resources, and given the lack of promised bitcoin integration and the abysmal privacy situation hidden under a veneer of ad-blocking, I see little to no reason to use this new browser. It might be an upgrade if you’re moving from Internet Explorer or Safari, (or a really dirty install of Firefox) but the UX feels like a portal into the mid-2000’s, and any performance increase you’ll feel is an almost guaranteed placebo.

If you want a pretty, clean, user experience, try out Vivaldi. It performs similarly, and there’s a lot of thought put into the UX. Need privacy or just hate web advertising? Install a few add-ons in Chromium or Firefox.

Want to get paid BTC to view ads? Try getting in early on an MLM scheme, because there’s no word on when that’ll be coming to mainline Brave. Given time, and assuming the devs make good on all proposed features, this browser may become attractive, if not blazing fast. Until then, stick with what you’ve got, or try one of the other perfectly serviceable browsers represented in the benchmarks.

Questions about the browsers covered here? Leave them in the comments!