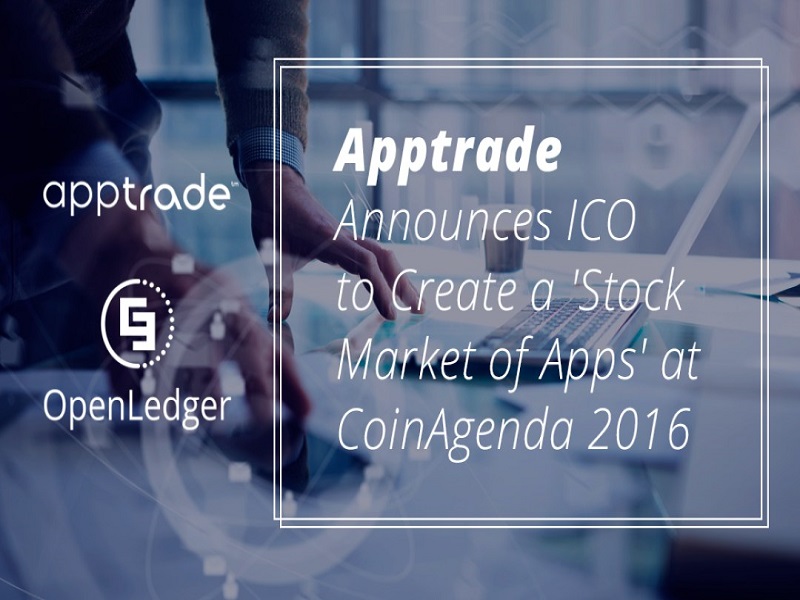 Apptrade, recently announced at CoinAgenda in Las Vegas, and covered by Forbes contributor Roger Atkins, will hold an ICO with OpenLedger.

Disclaimer: This article is sponsored by Bitcoin PR Buzz.

This ICO is one of three upcoming crowdsales on the OpenLedger platform that will reportedly bring mainstream attention to the ICO method of fundraising, according to the decentralized conglomerate.

Apptrade: ‘The Stock Market of Apps’

Apptrade, calling itself “the stock market of apps,” presents a new way for app developers and publishers to raise funding for their projects. According to a press release, the platform will let developers pool resources that everyone can use as “collateral to attract funding.”

In return, each app benefiting from the pool contributes a portion of its earnings to a shared reserve. Held on a blockchain, OpenLedger said that Apptrade’s resources come with “standardized regulatory features,” which it said will make the app attractive to institutional investors

Furthermore, with its large set of analytical tools, OpenLedger said Apptrade will allow speculators “to easily track the monetary trajectory of portfolios.”

“Apptrade’s venture is an innovation in investment finance, one that could have a massive impact on the future of fundraising.”

Apptrade announced its ICO at CoinAgenda last week. Developers will offer an Apptrade-specific token in the crowdsale, which gives holders a 10 percent stake of the app’s market value and future revenue.

“We have the backing and support of [Boesing],” Apptrade founder Daniel Pineda said. “OpenLedger has built the marketplace for smartcoin creation.”

Do you think this project will have a successful ICO on OpenLedger? Will it really attract institutional investors? Let us know in the comments below.

Is Silvergate In Trouble? Why Didn’t KYC And AML Prevent The FTX Fiasco?